Recording Engineer/Producer and Recording Studio Acoustic Designer and now a Member of The Louisiana Music Hall of Fame.

William Evans is also a Member of The Grammy Hall of Fame, inducted with Clifton Chenier's, (The King of Zydeco) Grammy award winning album, "Bogalusa Boogie", recorded at Bogalusa Louisiana's World Famous "Studio in the Country" in 1973. This award goes to the album, artist, producer, engineer, and studio.

William S. Evans (known as “Bleu” Evans in the entertainment industry) is a recording engineer, producer, and studio acoustic designer and builder, who is a Louisiana Native. He designed and built Studio in the Country (the third studio he built, one of the world’s most famous and productive studios ever) in Bogalusa, Louisiana at the age of 21. He began drawing the plans for the design at age 16, started construction in 1971, and completed the studio, with the help of his father, R.S. “Smokey” Evans. The studio opened to the public on July 7, 1973. His creation has attracted many famous artists and producers who recorded albums producing sales of over 170 million units. Over 64 Gold and Platinum Albums have been recorded, mixed, or been partially recorded at Studio in the Country (United States, Canada, Europe, and Asia). Many of these albums were also engineered and/or produced by Evans.

These artists represent numerous multi-platinum records that were produced at Studio in the Country. They include classic platinum albums by Kansas: “Masque”, “Leftoverture”, and “Point of Know Return”. “Leftoverture” and “Point of Know Return” contained the gold-certified hits: "Carry On Wayward Son" and "Dust in the Wind". Other Gold and Platinum albums from Studio in the Country include “Stevie Wonder's Journey Through the Secret Life of Plants”, “Stevie Wonder's Original Musiquarium, Vol. 1”, Stevie’s “At the Close of a Century”, and “Song Review”, “Save His Soul” by Blues Traveler, “Smells Like Children” by Marilyn Manson, “Boats, Beaches, Bars and Ballads” by Jimmy Buffett, “Heartbreak Station” by Cinderella, "Inspiration" and "Anthology", certified- gold, by Maze, Featuring Frankie Beverly, and the 12 times platinum “Dirty Dancing” soundtrack album.

Additional work done at Studio in the Country includes “The Hungry Years” by Willie Nelson was recorded here by Evans and many additional tracks by Willie Nelson which appear in the movies “On the Road Again”, "Honeysuckle Rose", and 2 additional albums, the Jack Nitzsche Produced, “Fiyo On The Bayou” by The Neville Brothers, “Louis Prima Meets Robin Hood” by Louis Prima (Disney Pictures), The Nitty Gritty Dirt Band's certified-gold “An American Dream”, "20 Years of Dirt", and Thunderhead's self-titled first album (produced by Johnny Winter and Bleu Evans), Zebra's certified-gold self-titled debut album “Zebra”, “Rock 'N' Roll Gumbo” by Professor Longhair, Pete Fountain's “Alive in New Orleans”, The Wild Magnolias “They Call Us Wild” by The Wild Magnolias, Peter Yarrow's “That's Enough For Me” working with Allen Toussaint, numerous albums by Louisiana's LeRoux (including the hit single "New Orleans  Ladies"), “Lonesome Road” by Doc and Merle Watson, Betty Davis' “Is It Love Or Desire” (Miles Davis' Wife), Willie Tee's "Anticipation", “High Life” by Frankie Miller, "Spanish Doors" from the “Adorata” EP by The Gutter Twins, “American Patchwork” by Anders Osborne, and “My Feet Can't Fail Me Now” by The Dirty Dozen Brass Band. A major contributor of the success of Studio in the Country are all the recording artists from all over the world.

Evans also recorded and mixed or was a consultant for many motion picture sound tracks with Jack Nitzsche producing including “Cruising” with Al Pacino, “The  Exorcist”, "One Flew Over the Cuckoo’s Nest”, with Jack Nicholson, “King of the Mountain” with Deborah Van Valkenburgh, and “Officer and A Gentleman” with Richard Gere which resulted with an Academy Award for the Oscar winning song of the Year, (Best Original Song) "Up Where We Belong" written by Jack Nitzsche and Buffy Sainte-Marie and performed by Joe Cocker and Jennifer Warnes. The song reached number one on the Billboard Hot 100 in the US and topped the charts in several other countries. It also sold more than one million copies (Platinum Award) in the US and was recognized by the Recording Industry Association of America as one of the Songs of the Century. Cocker and Warnes were awarded the Grammy for Best Pop Performance by a Duo or Group with Vocals, and Nitzsche, and Sainte-Marie won both the Academy Award and Golden Globe Award for Best Original Song. Evans also engineered music in motion pictures for Dennis Hopper.

After selling the studio Evans bought his father’s wholesale distribution company, “The Evans Tobacco Company” (later changed to “The Evans Distribution Group”.) The company distributed to convenience stores in 7 states. This company was sold to John Georges, C.E.O. of Georges Enterprises and is now called “Imperial Trading Co.” Evans also owned a chain of convenience stores in 5 states.

Evans also started a new software company, “Creative Data Research, Inc”. CDR developed the most used software system in the wholesale distribution industry in the United States. The CDR “DAC System” (Distributor- Analysis-Control) is used by distributors is all 50 states.

Evans is also considered to be the “Father of Pay at the Pump Technology”. Evans created the “Encompos” touch screen point of sale system which is found in almost every convenience store in the U.S. and worldwide. His idea was to not only allow a customer to pay at the pump but more important was his design of a system which would take the three main discrete systems that were in use at the time: point of sale register, electronic pump controller, and credit card verification systems. Evans moved them to a touch screen PC combining the three systems in to one totally integrated platform by replacing hardware with custom written software code. This is The CDR Encompos Retail Point of Sale System. The Encompos system was sold to Gilbarco, a division of Exxon.

Bleu is also the holder of many certifications:

Evans is also a talented wood worker and furniture maker known for several works of art including Tiger Wood's "Master's Trophy Table" now in Florida and "Hartley Peavey's Music Chair" which resides in his office in Meridian, Mississippi today.

Bleu has produced concerts for charities; his favorite is St. Jude Children’s Research Hospital in Memphis, TN, who saved the life of his daughter, Kimberly Allison Evans. Bleu has 6 children: Dawn, a housewife in Covington, LA., Kimberly Allison Evans (deceased), Christopher S. Evans, a construction engineer with degrees in Construction Engineering and Business, (LSU), Kate E. Evans, an entertainment, motion picture and television attorney as well involved in production, (LSU, Loyola University, NOLA), Lizzie E. Evans, a software analyst, (LSU), and Patrick J.S. Evans who graduated in 2017 with a degree in International Studies from LSU. Patrick is multi-lingual and can be found in many Central and South American Countries studying, performing Spanish Language interpretation, and teaching English.

Bleu has 3 extremely close sisters, Mary Jo Evans Lundy and Husband Arvid, Catherine Ann Evans Williams and Husband Ernest, and Beverly Jane Evans Knight and Husband Ralph. Much of Bleu's Love and Support has come from his Sisters and Brothers-in-Law.

This is a compilation of the Board of Directors of The Louisiana Music Hall of Fame, Mike Shepherd, President and Director. Dell Moon is a Board Member and Co-Founder of the organization. 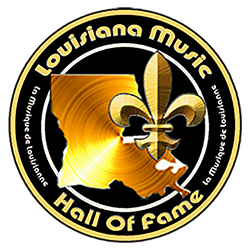 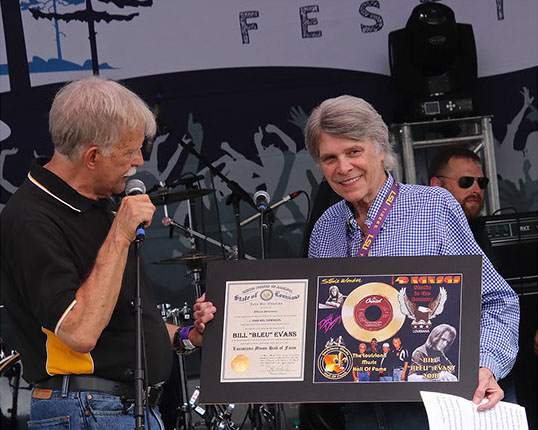